Russian sage (Perovskia atriplicifolia) and lavender (Lavandula spp.) are both perennial plants that are known for their fragrant foliage and attractive flowers. 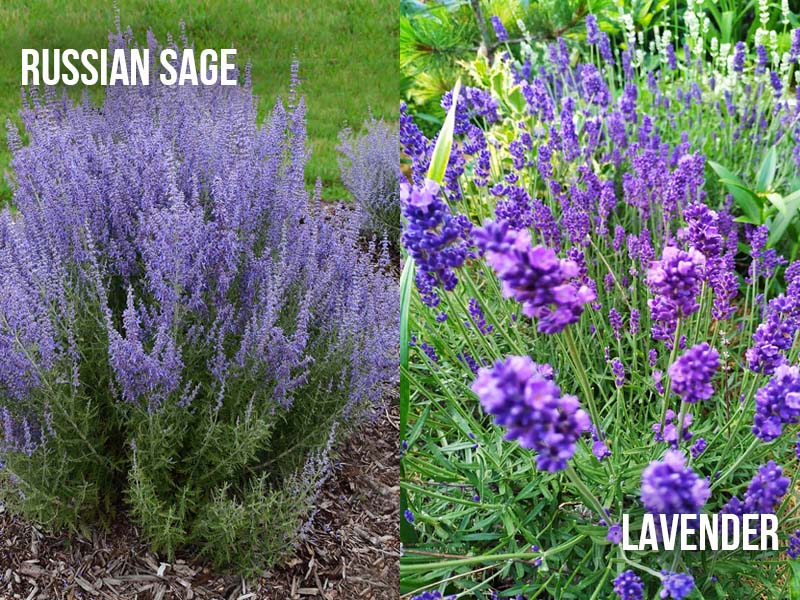 However, there are several differences between the two:

Is Russian sage as fragrant as lavender?

Russian sage is not as fragrant as lavender. While the leaves of Russian sage do have a mild, pungent aroma, it is not as strong or as noticeable as the scent of lavender flowers. Lavender is known for its strong, sweet, floral scent, which is why it is often used in perfumes and other scented products. Russian sage, on the other hand, is more commonly used for its ornamental value, rather than for its scent.

Are the leaves of Russian sage the same as those of lavender?

Are Russian sage and lavender the same size?

However, some varieties of Russian sage and lavender can be smaller or larger than these average heights. It’s important to choose a variety of Russian sage or lavender that is suitable for the size of your garden or landscape.

Does Russian sage have the same use as lavender?

Russian sage and lavender have some similarities in their uses, but they also have some differences. Both plants are used in landscaping and gardening for their attractive flowers and fragrant foliage. They can be used to add color, texture, and fragrance to a garden or landscape. However, they have different uses beyond ornamental value.

Russian sage is mostly used for its ornamental value, while lavender has a number of other uses. Lavender is known for its strong, sweet, floral scent, which is why it is often used in perfumes, cosmetics, and other scented products.

Lavender is also used as a culinary herb, and it is sometimes used in herbal remedies for its calming and soothing properties. Russian sage is not used in the same way as lavender and is not used for its scent or for any medicinal purposes.

Which is better Lavender or Russian Sage?

It’s difficult to say which plant is “better” between lavender and Russian sage, as it ultimately comes down to personal preference and the specific needs of your garden or landscape. Both plants have their own unique features and benefits.

Lavender is known for its strong, sweet, floral scent and its ability to attract pollinators such as bees and butterflies. It is also used as a culinary herb and has some medicinal properties. Lavender is easy to grow and requires minimal maintenance, as long as it is grown in well-draining soil and gets plenty of sunlight.

Russian sage is known for its tall, slender stems and delicate, silvery-gray leaves. It is a hardy plant that is tolerant of hot and dry conditions, and it requires minimal maintenance. Russian sage is a good choice for gardens with limited space, as it has a compact habit and can be used as a border or a background plant.

Ultimately, the choice between lavender and Russian sage depends on your personal preferences and the specific needs of your garden or landscape.

What advantages does Lavender have over Russian Sage?

Lavender has several advantages over Russian sage, depending on your needs and preferences: